The render is developed by a popular tipster Benjamin Geskin, that suggest that the front view of the Nokia 9 (2018) will feature a thin-bezel display with a notch on top. The display notch houses the front-facing camera sensor, the earpiece, and some sensors. Sensors include the ambient light sensor and the proximity sensor. While below the display Nokia’s branding “Nokia logo” shines in Silver color.

The fresh Nokia 9 concept render (2018) shows a display notch that looks very similar to the Nokia X6. However, the rear view of the Nokia 9 (2018) shows a five camera sensors. There’a flash module between the rear camera setup. The flash is not a normal flash it could be a Xenon flash. Further, the Zeiss logo is also sitting at the center of the camera setup, that suggests premium optics. While on top of the rear camera setup there is also a noise-cancellation microphone. 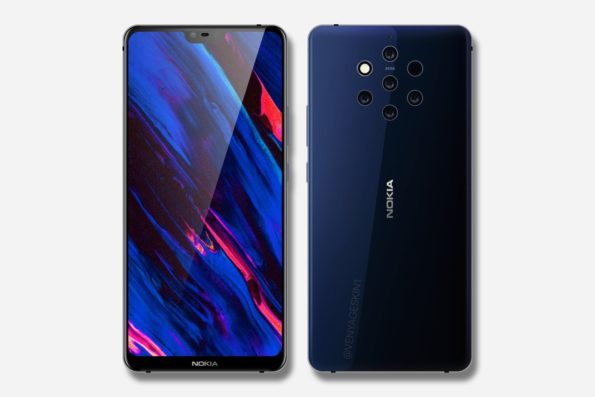 According to some past reports the handset could come with a 6.01-inch display with a Corning Gorilla Glass 5 protection. There’s will be a Qualcomm Snapdragon 845 SoC, coupled with up 8GB of RAM + 256GB of onboard storage powering the handset. Since the Nokia 9 (2018) is also speculated to be a part of the Android One programme it may run Android 9.0 Pie out-of-the-box because of premium.